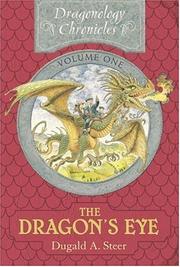 The Dragonology Chronicles, Volume One

From the 'Ology series

by Dugald A. Steer

In this paint-by-numbers spin-off from the popular Dragonology (2003) and its many progeny, Steer pitches two young apprentice dragonologists into a struggle between scientific dragon researcher Dr. Ernest Drake and his unscrupulous rival, Ignatius Crook, for control of a powerful talisman. Thrilled to discover not only that dragons exist, but that their absent parents have actually been off in India for the past four years on a secret dragon rescue project, impulsive Daniel and his spunky sister Beatrice are repeatedly ambushed, captured, threatened and tricked by Crook and his evil Russian ally Alexandra Gorynytchka, while trailing Dr. Drake in search of a gem that’s one of 12 hidden “treasures” with assorted magical properties. Unabashedly pandering to rabid dracophiles, the author has dragons, though supposedly rare, popping up continually in a wide variety of shapes and sizes, and also gives his learned Doctor no compunctions about taking timeouts for lectures on dragon lore. Though illustrated with full-page, elaborately detailed views of characters and creatures, this outing is not only trite, it lacks the visual appeal of its “nonfictional” predecessors. (Fantasy. 10-12)