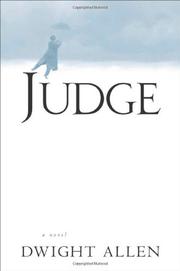 Ex–New Yorker staffer Allen (The Green Suit, stories, 2000) offers an eloquent but determinedly downbeat first novel about the family and clerk of a recently deceased Kentucky judge, all at sea about what to do with themselves.

It’s easy for Judge Dupree: he gave his liberal opinions from the bench (confounding those who expected otherwise from the dyed-in-the-wool Republican), defended his harping, health-food freak of a spouse against their two sons, had a glimmer of the life that might have been when he finally kissed his longtime clerk, Lucy, at age 80—and then died. Lucy, though, with no plans for her future, goes to church in hopes of finding a direction. There, she finds Morgan Dupree, the Judge’s divorced younger son, a sometime sportswriter who has come back to Louisville from Manhattan to write a book about his father. The other son, Crawford, still suffering the consequences of landing on his head in a Manhattan street after colliding with a bicyclist, has grown diffident in his teaching and so estranged from his wife in Wisconsin that she starts an affair, while he tries to take up with his son’s much-younger ventriloquist teacher. The Judge’s widow, meanwhile, fusses and frets in her own way, but finds a reliable companion in her yardman, who buries the Judge’s old dog for her when the pooch goes into convulsions and dies on the patio. Part of the mix too is “Uncle” Louis, the Judge’s cousin and best friend, an alcoholic and closet homosexual who finally comes out by bringing home dark-eyed Lazaro from a trip to Guatemala, then succumbs to cancer not long after. As Morgan pursues Lucy, and Crawford travels with the ventriloquist, the Judge, an unabashed train enthusiast, rides the rails as a ghost, occasionally appearing to his loved ones in their distress.

A delicate touch throughout, but the characters, for all their foibles, are largely wretched, racked, inscrutable souls next to whom the ghostly Judge seems a paragon of substance.