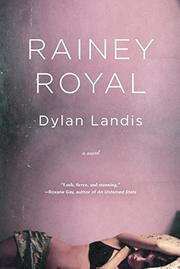 In 14 linked stories (one of which won a 2014 O. Henry Prize), Landis shapes a mesmerizing portrait of a teenager in 1970s Greenwich Village.

Rainey Royal’s life is wantonly glamorous, degenerate, sophisticated—a lonely combination for a 14-year-old girl whose mother has run away to an ashram. She lives in the Village with her father, Howard, a renowned jazz musician whose acolytes fill their once-grand town house (chandeliers and Beidermeier chests are periodically sent to Sotheby’s to keep the lights on and the drugs flowing). The acolytes are a nuisance—they rummage through Rainey’s things, use her bed, and the girls sleep with Howard—but it's Gordy, Howard’s best friend and accompanist, who causes Rainey shame and confusion when he sneaks into her room every night to stroke her hair. Howard forces Rainey to take birth control pills, to trim his beard, to make allowances for the stream of strangers, but there are things that strengthen Rainey: her art; her friend Tina, who understands everything; and Saint Catherine of Bologna, a surrogate protector in lieu of a mother. Seemingly on the verge of becoming a victim, Rainey is a predator, too—to the gentler girls at school, to the young men hanging on Howard, and, in the best of the novel’s sections, to a young couple she and Tina follow home and force into their apartment at gunpoint. Once there, they take the kind of revenge only powerless teenage girls can think of. As Rainey gets older, she gets commissions for her art, tapestries (like the novel itself) made from the detritus of a person’s life. Landis takes more risks when Rainey is younger than she does in some of the later stories, which include more of Tina and another girl, Leah, a shift in perspective that makes the novel less intense.

Landis (Normal People Don't Live Like This, 2009), a perceptive writer, has created a kind of scandalous beauty in her tale of the simultaneously fierce and vulnerable Rainey.