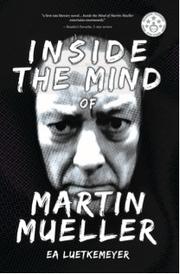 INSIDE THE MIND OF MARTIN MUELLER

Luetkemeyer’s (The Book of Chuck, 2009) dreamlike tale follows a prison inmate as he thoroughly examines the nature of existence.

Martin Mueller is serving time at Lime Ridge State Correctional Center. The transgression that led to his confinement isn’t immediately revealed, but his release appears imminent. He was once the busy, billionaire owner of massive conglomerate Mueller Enterprises, but now he spends his days interacting with fellow prisoners, including Crazy Carl and Wilbur, who writes fantastical stories of the supernatural for Martin to read. But Martin also has his own project that he’s working on: He’s “attempting to solve a great mystery,” essentially debating humanity’s origin and purpose—which also entails questioning his own purpose. He visits the cell of inmate John Brown, who mesmerizes Martin by proving that he’d predicted Martin’s arrival that day as well as his topic of conversation. John then recounts his past lives in tales that stretch back thousands of years. Later, Martin’s memories of his business struggles and meeting his wife, Millie, reveal an apparent link between him and John. Martin ultimately learns things about himself that may significantly impact the “real world” to which he’ll soon be returning. Luetkemeyer’s novella packs an impressive amount of content in a concise narrative. From the beginning, it’s clear that Martin’s point of view is unreliable; for example, at one point, he drives a car home and then heads to his cell—so readers will be uncertain where he is or what part of the overall story he’s imagining. The novel subtly incorporates larger themes, including religion (John claims to have encountered figures from the Bible) and race (rich, white Martin gets preferential treatment over poor, African-American inmates). Although a sense of surreality reigns, Luetkemeyer’s prose is full of tangible images, such as a cryptic memo from the warden that discusses “Alternate Religions.” Although the ending does offer resolution, it also sounds an unmistakable note of ambiguity.

An eccentric but extraordinary story about a potentially unsound mind.