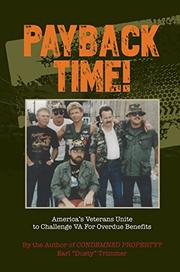 A Vietnam veteran argues for better health care for veterans and a conservative surge in the 2016 elections.

In this follow-up to Condemned Property? (2013), Trimmer returns to the challenges Vietnam veterans have faced since the 1970s, with particular emphasis on the recent shortcomings of the Veterans Administration. Trimmer draws on his own story—he has clashed with the VA over conditions related to his Vietnam service—and those of other veterans, along with research and news reports, to present a portrait of a system incapable of meeting its users’ needs. The book also includes copies of letters Trimmer sent to government officials, replies he has received from them, and testimonials from readers of Condemned Property? He proposes a number of solutions, including punishment for VA officials, sufficient funding, and supporting Ben Carson’s campaign for the presidency. Although Trimmer gives the president credit for some improvements in the services offered to veterans, his dislike rings clearly, often in strident terms: “If his majesty, Barack Hussein Obama has enough time on his hands”; “If Dr. Ben has decided to enter the brutal presidential election, may God be with this fine gentleman. Too bad he wasn’t out first black President instead of Barack Hussein Obama who is not a great American.” Throughout, Trimmer is explicit about the role he plays—“I am a Christian Crusading Militant who has vowed to remain a soldier for the rest of my life, which means I am prepared to put my life on the line for America...again.” However, the book’s detours into polemic territory are often unfocused and uneven, adding little to the central arguments about the treatment of veterans from Vietnam and more recent wars. Trimmer is at his most successful in moments when his passion and knowledge of the veteran experience combine to make a compelling case for the country’s continuing responsibility to its soldiers.

An unfocused but deeply felt plea for better treatment of veterans.