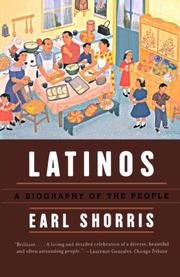 LATINOS: A Biography of the People

Personal, impassioned overview of the fastest growing minority in the US. Shorris, a social critic (Jews Without Mercy, 1982, etc.) and novelist (Under the Fifth Sun, 1980, etc.), concentrates on Mexican-Americans, Puerto Ricans, and Cuban-Americans, mixing facts, observation, history, analysis, love, and outrage. Shorris (who grew up in a mostly Mexican-American El Paso neighborhood, married a Latino and acknowledges his personal and political liberal bias) admits that the very term ""Latino"" is problematic, blurring racial, cultural, and historical diversity. To overcome this inherent difficulty, he tends to focus on individual lives and also occasionally, perhaps necessarily, to bog down in qualifiers and sensitivity. The result 'is a book that sometimes stumbles but that scores high for impact, scope, and heart: Shorris celebrates Latino achievements; visits sweatshops (where some workers cam 18Â¢ an hour), classrooms, illegal border-crossings, and detention camps; undermines stereotypes (e.g., by portraying Cubans who are neither right-wingers nor criminals); critiques earlier influential analyses that focused on the so-called ""culture of poverty""; and provides a new schematic framework for understanding the Latino as immigrant. While he blames both minority and majority societies, as well as random historical factors, for why Latinos have achieved little political and economic power here, Shorris offers an account of the effects of colonialism on Puerto Ricans and of the brutal oppression of Mexican-Americans that has eye-opening power: The systematic exploitation of Latinos--centuries-old and still thriving--has rarely been so thoroughly discussed in a major forum. Wide-ranging, groundbreaking, opinionated, and very important.