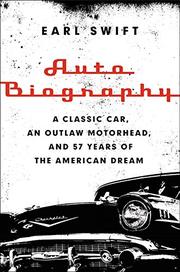 A Classic Car, an Outlaw Motorhead, and 57 Years of the American Dream

In a compassionate yet never overly nostalgic nonfiction portrait of two behemoths from another age, Virginian-Pilot reporter Swift (The Big Roads: The Untold Story of the Engineers, Visionaries, and Trailblazers Who Created the American Superhighways, 2011, etc.) offers a startling portrayal of a violent entrepreneurial misfit.

The author, who has an obvious boyish joy for things that go fast, locks in on a guy named Tommy Arney, a local legend in rural Moyock, N.C. Along with a small crew that includes his first mate, Skinhead, his business manager, Slick, Painter Paul and other malcontents, Arney joyfully buys and sells “project cars,” those fixer-uppers that dads like to work on with their kids on the weekend. But make no mistake—Arney is no curmudgeonly grease monkey with a heart of gold. He’s a profane gladiator from a former age who has cursed all the curses, slept with more women than he can count, and generally drunk and brawled his way through his whole existence. One of the first things Swift relates is that Arney carries surprisingly few scars for a man who is said to have once bitten a police dog back. He’s also a man at war with his times. His empire of go-go clubs and industrial real estate has fallen into ruin, and his dodgy bank loans and sprawling shop yard have the city council and the FBI lining up to nail him in court. It may sound straight out of Sons of Anarchy, and in some ways, it is. However, the heart of the story is more Bill Bryson than Hunter Thompson. Along the way, Swift lovingly recounts—despite a palpable frustration—Arney’s thoughtful restoration of a classic 1957 Chevy as well as the stories of its dozen owners. Neither arc ends the way readers might expect, which comes as a pleasant surprise.

A big, weird, heartfelt book about a badass who could give a damn whether you root for him or not.