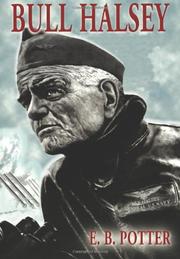 A blunt, essentially favorable appraisal of the fighting admiral whose risky, often reckless tactics--and knack for press relations--made him one of WW II's great heroes. Potter, sometime chairman of the naval history department at Annapolis, had access to Halsey's private papers, which include an evident wealth of material not in his 1947 autiobiography; he also had the cooperation of Halsey family members. As one result, the author is able to provide telltale details on Halsey's youth (as the rambunctious son of a career naval officer), his indifferent scholarship and gridiron heroics as a Naval Academy midshipman (Class of 1904), and Halsey's upwardly mobile service in the pre-Pearl Harbor Navy. Among other distinctions, Halsey was a pioneering advocate of naval air power who earned his wings at age 51 in 1934 and won promotion to rear admiral in 1938. Wisely, Potter devotes the bulk of his text to a balanced account of the leading role played by Halsey in the defeat of the Japanese. In the spring of 1942, he commanded Task Force 16 from which the Air Force's Jimmie Doolittle launched his daring raid on Tokyo. Absent from the Battle of Midway, owing to a severe case of dermatitis, Halsey returned to salvage a deteriorating situation at Guadalcanal. Working closely with MacArthur (who greatly admired his willingness, even eagerness, to go in harm's way to destroy enemy vessels and aircraft), Halsey also espoused leapfrogging; this strategy involved bypassing islands with major concentrations of Japanese troops, leaving them to die without air cover or supplies. As Potter makes clear, however, there were dark chapters in the Halsey story. During the Battle of Leyte Gulf, for instance, the aggressive admiral left a key strait unguarded to go steaming after a decoy carrier force almost wholly without operational aircraft or pilots. To the end of his life, Halsey was defensive on the score of this incautious pursuit, celebrated in knowledgeable military circles as Bull's Run. Only the old-boy network and his considerable reputation saved him from being summarily relieved of command. Potter logs a number of other occasions on which the hard-drinking Halsey nearly came to grief, most notably the time he rashly exposed the Third Fleet to severe typhoon damage during the Okinawa campaign. Potter's diligent research has allowed him to offer a coherent, revelatory narrative which addresses Halsey's shortcomings as well as his valorous achievements. In brief, he has cleared the decks of myth-makers' hyperbole without tarnishing in any significant way the triumphs of a complex, charismatic warrior.