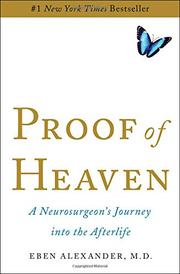 A Neurosurgeon's Near Death Experience and Journey into the Afterlife

A remarkable account of miraculous recovery from bacterial meningitis and a transformative “Near-Death Experience.”

On Nov. 10, 2008, at the age of 54, neurosurgeon Alexander awakened with an excruciating head- and backache and then suffered a grand mal epileptic seizure. Rushed to the hospital, tests showed that his brain was infected with E. coli bacteria that proved to be highly resistant to antibiotics and were destroying his neocortex. He remained in a deep coma for a week, as the expectation of his survival dimmed. Alexander recounts significant events in his life and explains his medical condition and the treatment he received, although at the time, he was not consciously aware of the situation. Interspersed are chapters in which he relates what he believes to be details of a “[b]rilliant, vibrant, ecstatic, stunning” psychic event he experienced during the coma. He describes an extraordinary radiant white-gold light and the most beautiful music he had ever heard, as well as travel to the gates of heaven, accompanied by an angelic figure who led him to the “strangest, most beautiful world” he had ever seen. Although Alexander had previously been a religious skeptic, this intense experience convinced him of the existence of heaven and a loving, personal God; the primacy of consciousness over matter; and the reality of psychic experiences such as telepathic communication. After seven days, he awoke with his faculties intact, although he needed time to fully recover his memory.

Alexander uses his medical credentials to substantiate the belief that his reconstructed memories offer conclusive proof of his current religious beliefs; readers who don't share these beliefs will find his account less convincing.