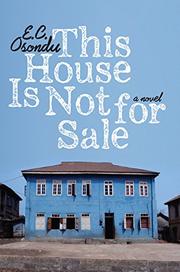 THIS HOUSE IS NOT FOR SALE

The patriarch of a large extended family rules over his kingdom in a family home on the edge of an African village.

Although nominally a novel, this full-length debut by Osondu (Creative Writing/Providence College; Voice of America: Stories, 2010) is more a collection of portraits of a diverse body of characters, sometimes related and sometimes not, all living under the protective wing of “Grandpa,” a generous and mildly sinister father figure to the very large household—he’s somewhat Godfather-esque in putting in the fix. Settling the future of a man who shot his wife’s alleged lovers, Grandpa tells him, “You have killed one man. The other man is still alive, he survived. I will talk with the police. They will understand. I will help them understand.” Although there's a common narrator, a young family member, each chapter focuses on the story of a different character. There are the eccentrics, like Uncle Aya and the befuddled “Baby,” saddled with the nickname while her father was away and never properly named. There are the disavowed, like Ndozo, who's publicly humiliated after she steals money the family earned selling in the market. There are also ministers, soldiers and grieving parents, all lovingly described in a style that strongly reflects Osondu’s affection for Raymond Carver. While there's a sense of myth here—the denizens of the Family House are deeply superstitious, prone to gossip and virtual prisoners to community ritual—the stories have a very modern, compassionate voice as well. Whether describing the uncle whose job is to burn discontinued currency arriving home with pockets of old money or the grieving widow who sells her own daughter’s virginity to a stranger, Osondu is ceaseless in his willingness to examine the human condition in all its glories and frailties.

A wide-ranging portrait of an African community largely at odds with itself.