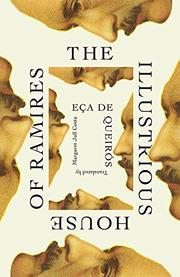 THE ILLUSTRIOUS HOUSE OF RAMIRES

Writing at the height of Portugal’s overseas empire, de Queirós traces the life of a man who is a touch too proud of his ancestors, so much so that he reminds an emissary of the king himself, “My ancestors had a house in Treixedo long before there were any kings of Portugal, long before there was a Portugal.” By the end of the book, we are given to understand that Gonçalo Mendes Ramires, who quixotically likes to call himself the Nobleman of the Tower, is himself a metonym for the Portuguese nation in all its bumbling glory: “His generosity, his thoughtlessness, his chaotic business dealings, his truly honorable feelings, his scruples, which can seem almost childish”—and that’s to say nothing of a certain shlemielishness that doesn’t quite hold up well by comparison to the illustrious ancestors he reminds himself of daily, enshrined in the portraits and books with which Gonçalo surrounds himself in his teetering family home. He’s a bit more self-aware than Cervantes’ great hero, but we are assured that Gonçalo, however much he might like to have fought along his ancestor Tructesindo, would not have fit in well. Still, Gonçalo manages to make something of himself as the story spins out, having gone from callous reactionary to somewhat technocratic African colonialist and having finally finished the long book about his noble house that occupies much of his waking time. This is very much a 19th-century novel, unhurried and richly observed; while it can be a little fusty, de Queirós, who has been likened to Flaubert, turns in elegantly poetic prose: “When I was fighting the Moors, a physician once told me that a woman is like a soothing, scented breeze, but one that leaves everything tangled and confused.”

A touch long but with never a wasted word. Fans of Vargas Llosa and Saramago will find a kindred spirit in these pages.

BETWEEN ETERNITIES
by Javier Marías
Fiction

THE BOOK OF DISQUIET
by Fernando Pessoa