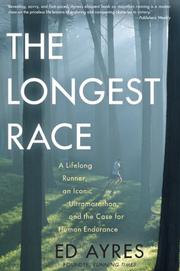 A Lifelong Runner, an Iconic Ultramarathon, and the Case for Human Endurance

A leading environmental activist and ultramarathoner uses the 2001 JFK 50 Mile as a staging ground for his reflections on running, aging, and saving the planet.

Running Times founding editor and publisher Ayres (God's Last Offer: Negotiating for a Sustainable Future, 2000, etc.) was 60 when he decided to run the JFK 50 Mile again, two months after 9/11. He had placed first in the ultramarathon in 1977 and wanted to see if he could still keep up with the younger competitors. His aim was not to set a world record but to determine how much accumulated experience would compensate for the inevitable attrition of age. Ayres admits he is addicted to running, but its importance for him goes beyond the physical—a race of that length is “a ritual of survival.” He had been running competitively since high school and recalled how the first JFK 50 Mile, held just months before Kennedy’s assassination, was a Cold War response to the president’s call for Americans to toughen up. While judging his pace and adjusting the rhythm of his breathing, Ayres speculated about the role played by long-distance running in the pursuit of game and the physical evolution of modern man. He drew parallels between sustaining the planet and maintaining health and vigor as we age, themes that still engage him today. He even had a few moments to muse on such mundane matters as the proper footwear for racing—not boots but flexible shoes that allow feet to sense the trail. Ayres won his age category in 2001, continues to compete at age 71 and intends to run the JFK 50 Mile again this November.

The author’s broad-ranging interests and accumulated wisdom will appeal to a wide readership, not just runners and environmentalists.