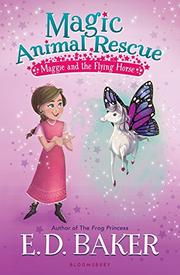 MAGGIE AND THE FLYING HORSE

While Maggie’s father chops wood across the forest, she’s left with her wicked stepmother, Zelia, and stepsiblings, including awful Peter. Her steps, new to the Enchanted Forest, don’t believe Maggie when she tells them about the magical creatures and accuse her of lying to cover up laziness. Zelia threatens to give Maggie’s bed to Peter unless Maggie stops with the stories and sticks to chores, then sends Maggie to help Peter tend his sheep. But Maggie falls asleep on the job, and Peter ditches her, leaving her to awaken to goblins! When a tiny flying horse tickles her while she’s hiding, Maggie brushes it away—but accidentally damages its delicate wing. Maggie takes it to Bob the Stableman, a person her grandmother had told her helped magical creatures, but only after cleverly evading a dangerous troll. Bob’s a kindred soul and supportive adult—a good thing since Maggie’s decision to do right by the horse instead of doing chores gives Zelia an excuse to make good on threats. Kids will relate to the injustice and to not feeling heard. The simultaneously publishing sequel, Maggie and the Wish Fish, continues the familial storyline through an encounter with an allegedly wish-granting fish rather than resetting to status quo. All illustrated human characters appear to be white.