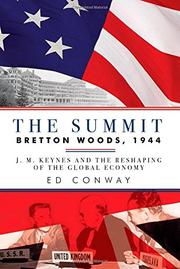 Bretton Woods, 1944: J.M. Keynes and the Reshaping of the Global Economy

Sky News economics editor Conway (50 Economics Ideas You Really Need to Know, 2009) covers the inside story of what really happened during the 22 days of the conference at Bretton Woods, New Hampshire, in July 1944.

The author provides a compelling portrait of the event, which took place on the international stage of big-power geopolitics and was driven by long-range changes in monetary relations. It was at Bretton Woods that the dollar became the world's senior reserve currency, replacing the debt-ridden British pound and the collapsed gold reserve system discredited during the Great Depression. Conway also chronicles the rise of the United States as the world's leading creditor from before World War I, and he outlines how that trajectory affected the proceedings, counterpointing the disastrous attempts of debtors like the British and French to revive the prewar gold standard. The author also extends the narrative to the present by way of President Richard Nixon's 1971 decision to take the dollar off the gold standard. Conway takes issue with earlier, narrowly focused economic treatments and the view that international monetary economics is “esoteric and irrelevant.” The author draws on previously untapped material from participants, (e.g., George Bolton of the Bank of England), including personal recollections, accounts and diaries, and archives from Russia. Conway documents the rich relationship between John Maynard Keynes and Harry Dexter White. Competition between the two was long-standing—White was determined to secure hegemony for the dollar after the war, while Keynes attempted to protect the U.K.'s finances from the effects of its indebtedness to colonies like India and South Africa—and Conway presents the relationship intriguingly throughout. Additionally, he portrays how Keynes' incredible arrogance and rudeness undermined his effectiveness with American policymakers.

The scope of the subject matter is impressive, and the execution is outstanding.