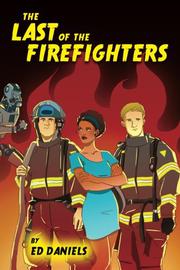 The Last of the Firefighters

In Daniels’ (Fire Chief, 2011) futuristic novel, a firefighter in Colorado’s Front Range copes with various technological advances that render his profession obsolete.
In the not-so-distant future, Johnny Stasso becomes a firefighter after an early traumatic experience and a failed attempt at finishing college. The profession suits Johnny well, as he has a passion for saving lives and keeping people safe. But as he raises a family with his wife, Nina, in Boulder, Colorado, he finds that staying a firefighter isn’t so easy. Well-intentioned technology companies develop firefighting equipment that, as the years roll by, becomes more advanced and renders Johnny’s job more administrative than active. It’s a wonderful premise, and Daniels’ greatest strength is portraying the technologies, which don’t seem terribly far-fetched: gear that monitors the firefighters’ vitals, robots that haul gear for battling wildfires, and so on. He’s at his best when the technologies reflect those of the present day; for example, when firefighters arrive at a university, it’s hard not to envision cell phones when Daniels describes the scene: “Distracted students wearing their virtual reality goggles were everywhere, and several took missteps in front of our trucks before their friends or alarms from the goggles caused them to stop and look up, surprised at our presence.” But although there’s a lot of fun in seeing what new technologies will come next, the story’s protagonist lacks complexity. Johnny is a likable but unreflective character, aside from a jarring scene in which he plans to murder someone in a jealous rage. Too often the story plods forward with repeated, undistinguished episodes of firefighting. If Daniels had allowed Johnny to be more involved in the decisions surrounding the various technologies, it might have made his character more interesting; usually, however, Johnny’s a passive victim. The fact that Nina works for one of the tech companies is glossed over for much of the book, only to be brought up at the novel’s conclusion in an unsurprising way.
An often entertaining, thought-provoking exploration of how technology may replace humanity, but relatively light on plot and characterization.