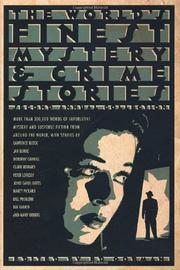 For their second installment of the series that began last year, veteran anthologists Gorman and Greenberg have pulled out all the stops in an ambitious attempt to produce the definitive yearbook of the short mystery. The 41 stories, all first published within the past year, are bookended by eight introductory essays surveying crime fiction in 2000 and Pete Hamill’s New Yorker salute to Ed McBain. The taboo against duplicate stories by the same authors has been lifted, allowing two apiece for the richly deserving Jan Burke, Mat Coward, Brendan DuBois, Edward D. Hoch, Clark Howard, and Kristine Kathryn Rusch. Unlike the rival Houghton Mifflin series, edited this year by Lawrence Block (p. 1164), which seeks out new voices on the genre’s cutting edge, Gorman and Greenberg keep generally within its conventional boundaries, and the contributors here (most of them, despite the title’s global aspirations, American or British) are an honor roll of familiar names: Doug Allyn, Robert Barnard, Joseph Hansen, Gillian Linscott, Stuart M. Kaminsky, Peter Lovesey, John Lutz, Ed McBain, Joyce Carol Oates, Nancy Pickard, Bill Pronzini, Peter Robinson, S.J. Rozan, Donald E. Westlake, and, yes, Lawrence Block. The stories range in quality from above average to superb; indeed the biggest mystery is how a single year could have produced a bumper crop of so many outstanding tales.

The only disappointment? Those introductory essays, most of them little more than graded lists of the year’s crime fiction from Canada, Australia, Germany, and the UK. How about skipping them next year and including one of editor Gorman’s peerless stories instead?