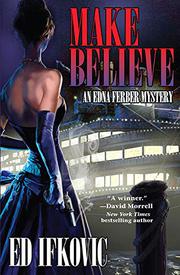 Back from a long-ago prequel in her hometown (Escape Artist, 2011, etc.), formidable author Edna Ferber returns to the 1950s and to her most unlikely avocation: amateur sleuthing.

When her old friend Max Jeffries, a peerless music arranger whose labors have enriched every screen version of Show Boat, writes a letter in defense of the Hollywood Ten that gets him attacked and blacklisted, his credit removed from the 1951 Technicolor version MGM is about to release, Ferber packs up the galleys of Giant and rushes to his side in support. Five days later, Max, shot to death in his bungalow, is beyond the staunchest support. Or is he? Vowing, “No one murders my friends and gets away with it,” Ferber makes the rounds of Max’s few friends—especially his other two musketeers, aging actor Sol Remnick and Egyptian Theater manager Larry Calhoun, who’ve gone in with Max on several little investments—and his biggest enemies, Ethan and Tony Pannis, whose mobster brother Lenny’s fatal fall from a balcony they blame on Max’s wife, Alice, who’d been married to Lenny until he hit the ground. But all these suspects, whom dyspeptic narrator Ferber sketches in lightning strokes, are upstaged by the blistering double portrait of Ava Gardner, the star of the new Show Boat, and her bantamweight lover and sparring partner, Frank Sinatra. Though Ferber has no use for the classless crooner, desperate to revive his flagging career by getting cast in From Here to Eternity, she brings radiant, insecure siren Gardner to triumphant new life, just as she did with Harry Houdini last time out.

As for the mystery, it’s a little embarrassing watching the Pulitzer Prize–winning Ferber running around town checking alibis. Come for the whodunit, stay for the stargazing.