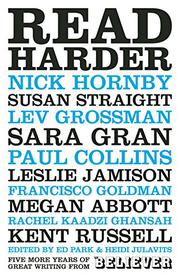 Nineteen essays, often funny and sometimes poignant, from the journalists, essayists and novelists long admired by the editors at McSweeney’s Believer magazine.

Upon its launch, the founders of the magazine said, “We will focus on writers and books we like. We will give people and books the benefit of the doubt.” Soon after, a critic described the magazine as “highbrow but delightfully bizarre,” which fits the bill. This new collection of essays by the likes of Nick Hornby, Susan Straight, Lev Grossman and Rachel Kaadzi Ghansah certainly strikes that unique and iconoclastic tone—McSweeney’s founder Dave Eggers’ tastes and style are all over this collection, if not his name. Edited by founding editors Park (Personal Days, 2008) and Julavits (The Vanishers, 2012, etc.), the collection spans a wide range of literary criticism, celebrity profiles, journalistic nonfiction and humorous ephemera. It opens with “The Disappearance of Ford Beckman,” by Michael Paul Mason, a story that wouldn’t go amiss in Esquire, concerning an iconic American artist reduced to making donuts at Krispy Kreme. Closer to the end, novelist Leslie Jamison examines a bizarre, Tennessee-based endurance test called the Barkley Marathons. On the literary front, mystery novelists Sara Gran and Megan Abbott tackle the enduring legacy of V.C. Andrews, while journalist Zach Baron delves into the late Robert Jordan and the finishing of the Wheel of Time saga. It can be a jarring transition, following Jeannie Vanasco’s examination of erasure (the art form, not the band) in “Absent Things As If They Were Present,” with Rebecca Taylor’s “Virginia Mountain Scream Queen,” remembering a lowbrow history in B-movies, but it’s refreshing, too. It’s really best to jump around—only readers can best decide if they should start with “How to Scrutinize a Beaver” (on 18th-century anatomy) or “If He Hollers Let Him Go” (chasing the ghost of comedian Dave Chappelle).

Hotly anticipated in 2020: The Believer’s Read Hard with a Vengeance.