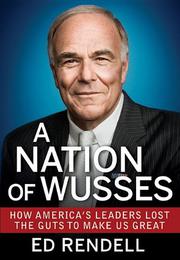 A NATION OF WUSSES

How America's Leaders Lost the Guts to Make Us Great

Veteran Democratic politico Rendell prescribes a potent tonic for today's anemic leadership, simultaneously looking back on his spirited 30-plus years in elected office.

Whether as district attorney, mayor, governor or head of the Democratic National Committee, the author has always been a reliable source of unscripted, straight-from-the-gut observations. Despite the provocative title, however, he doesn't seem particularly interested in skewering political rivals. Rather than dwelling on the negatives, this famously loose cannon is earnestly preoccupied with finding workable solutions to the many problems he sees in the United States. Not surprisingly, the author’s remedies trace back to policies he enacted as an elected official. But this is no ideological rant. In fact, the sheer joy with which Rendell recollects past victories and the raw enthusiasm he reserves for solving current problems are likely to win admirers of every political stripe. Where others may have viewed balancing budgets, cleaning up after snow storms and contending with critics as endless annoyances, Rendell appears to have genuinely enjoyed these challenges. While he supports Obama, he freely shows where the president has failed. He is most steadfast in his support for Hillary Clinton and writes that he is looking forward to putting a woman in the White House in 2016.