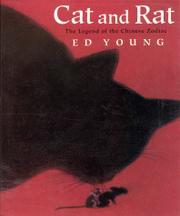 The Legend of the Chinese Zodiac

According to the notes at the beginning of the book, when the Chinese calendar was created, the animals ran a race, and the 12 who came in first had a year named after them. Young (Little Plum, 1994, etc.) describes the race, focusing on the cat and the rat; despite their plans to win together, the rat dumped the cat and came in first, while the cat was the 13th animal to finish. Thus, the cat and rat are forever enemies. As animal after animal crosses the finish line, the story becomes mechanical and then tedious. The illustrationscharcoal and pastels on rice paperare very dark and among the most abstract Young has every created; they depict animals in motion (predominantly their heads, with bulging eyes) at the end of the race. The text is printed along the side of page, black on white. Inclusion of a page of horoscopes along with the Gregorian equivalents to the animals' years will intrigue readers, but the story may not keep them involved to the end. (Picture book/folklore. 4-8)