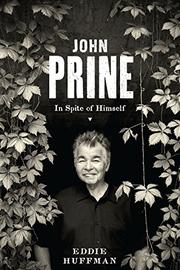 In Spite of Himself

A guide to the troubadour’s career lacks access to the artist himself but benefits from a subject who is as intriguing as his songs.

In his first book, Greensboro News & Record staff writer Huffman proves an amiable companion as he leads readers though the musical development of an artist whose songwriting uniqueness has prevailed over a decided lack of ambition and decades of commercial indifference. If it weren’t for his close friend and fellow troubadour Steve Goodman, who “had enough ambition for both of them,” Prine might have been happy to remain the singing mailman from suburban Chicago. The author shows just how little Prine enjoyed the business side of the music business and how the strength of his songwriting offset raw indifference as a singer and guitarist in his early studio recordings. More than once he was willing to chuck his career for something different. He never believed the critical claims made by others on his behalf: “If I’m a genius, how come it took me five years to get out of high school?” he told an AP reporter in 1978. “If I’m a genius, how come I don’t have three Cadillacs?” It might have seemed that Prine was destined to be known primarily from the songs on his 1971 debut album—“Sam Stone,” “Hello in There,” “Angel from Montgomery”—with subsequent efforts doing little to raise his profile as he bounced from one record label to another. Yet he amazingly rebounded in 1991 with “The Missing Years,” his most popular album ever and a return to critical acclaim. By then, Prine had started his own label and found domestic bliss with his third wife, and he has subsequently survived a couple bouts with cancer. If he’s lost the inspiration to write songs, that doesn’t seem to bother him much.

It’s difficult for Huffman to establish much stylistic continuity when he relies so heavily on quotes from other journalists, but the unlikely success of the reluctant performer makes for fascinating reading.