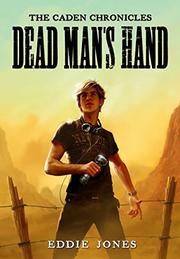 From the Caden Chronicles series, volume 1

When his family decides to spend their vacation at a ghost-themed old-West tourist trap, Nick is not enthusiastic, but when, minutes after their arrival, he discovers a dead body in a barn, he perks up.

Nick has a passion for detection aided by the Internet and has formed a group that calls itself the Cyber Sleuths, which uses analysis of television shows to solve crimes. This is Book 1 of a proposed series and is as preposterous as any TV crime show. At 14, Nick is both determined to uncover a murderer and easily distracted—by a girl, the need to be right and attempts at humor. Unevenly written and riddled with Nick’s irritating asides as well as seemingly random Bible verses, not much works here, least of all the mystery. Adding in rattlesnakes, bears, revolvers and deadly attacks with a shovel from a mysterious someone who is simultaneously packing a revolver doesn’t bring it up to snuff. The pace is meant to be fast, and it is. But by focusing on speed, it is often annoyingly vague—much like the younger sister who whines and nags whenever she appears, for no apparent plot-based reason.

Just the ticket for a class on how not to write an adventure story.