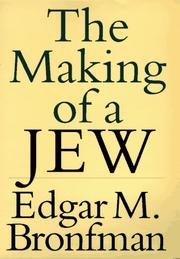 THE MAKING OF A JEW

A wealthy and powerful philanthropist chronicles his exploits on behalf of world Jewry. This memoir from the chairman of the Seagram Company Ltd. (which owns Putnam) and friend of presidents and prime ministers is better than might have been expected, but it's still of extremely limited appeal; the World Jewish Congress, of which Bronfman has been president since 1981, is far removed from the lives of most American Jews. Despite the title, Bronfman writes more about the making of deals rather than the making of a Jew, and he primarily describes his experiences as president of the WJC. Some of the stories are indeed good, such as the way he twisted a reluctant Lech Walesa's arm to condemn Polish anti-Semitism and used his friendship with former Soviet foreign minister Eduard Shevardnadze to win the freedom of a Jewish prisoner. Also, Bronfman writes with refreshing honesty. Few other Jewish leaders of his stature would write that former Israeli prime minister Yitzhak Shamir ``really pissed off President George Bush'' by building Jewish settlements in the occupied territories ``like there was no tomorrow.'' As far as Bronfman is concerned, there was indeed a tomorrow, represented by Prime Minister Yitzhak Rabin, whom he supported philosophically and monetarily. His descriptions of his horror at Rabin's assassination and his anger at those on Israel's right whom he accuses of creating the atmosphere for it—including current prime minister Benjamin Netanyahu—are by far the most powerful parts of the book: ``When I found out that the killer was a Jew . . . my disgust was overwhelming. . . . I called him a loathsome, arrogant cockroach. He demeaned every Jew in the world with his murderous act.'' An interesting and provocative memoir—but likely to be found so by an extremely small audience, limited primarily not just to Jews, but to those who recognize Bronfman as an important figure in Jewish affairs.