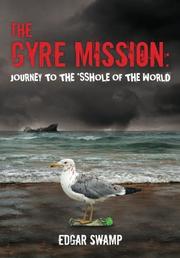 The Gyre Mission: Journey to the *sshole of the World

First-time novelist Swamp weaves an epic tale of a crew sent to assess a garbage heap in the Pacific Ocean—and to learn what happened to the last crew sent to investigate it.

Debris in the North Pacific Gyre has formed a mass three times the size of Texas. After a group scientists sent to the gyre mysteriously vanishes, the president of the United States opts to assign the task to “expendable volunteers” instead of wasting more scientists. The crew includes college students, naval recruits looking to avoid jail time, and even a dominatrix privately hired by the California governor spearheading the operation. When they get to the gyre, they find more than just trash—something far more hazardous. The novel delivers the droll, satirical tone suggested by its subtitle. Its ragtag band of characters has unapologetically bizarre traits: Dante, who’s made a career out of being a drug-trial guinea pig; Kenny, a former football player hooked on painkillers and booze; and Tyler, a con man who mooches off women but believes his affection for Melissa, the dominatrix, is genuine—because he told her his real name. The long book is divided into three parts; the first two introduce most of the prospective crew and the oceanic excursion to the gyre. In the third, the ship reaches the island of garbage and the story takes a decidedly Lovecraftian turn. Characters are subjected to putrid odors and vile substances and attacked by mutated creatures. This section, which takes up half the novel, is filled with potent but often grotesque imagery—such as a pit trap outfitted with a bed of syringes—and is likely to make even the most steadfast readers squirm. Readers may not find it easy to care about many of the people in Swamp’s story; Captain Harvey and the governor, for example, seem to hate everyone, and other crewmembers remain unidentified (although one finally gets a name, immediately prior to his savage death). However, the savvy Melissa and selfless Dante are likeable and will likely provide readers with enough sympathy to go around.