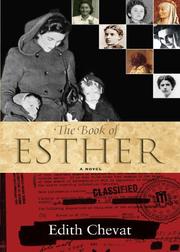 THE BOOK OF ESTHER

A sad, fearful portrait of a Jewish housewife living through the civil rights era, torn between family and morality.

Chevat’s (Love Lesson, 1998) new novel launches when Esther, middle aged and recently divorced, requests her declassified FBI files from the McCarthy era. Each file page refers to an event in Esther’s past, which she remembers in an associated chapter. In turn, each chapter closes with a vignette written like a letter to a woman Esther has studied, whose work and suffering has saved people throughout history. Ultimately, Esther is profiled the same way to show how her choices mirror those made by the featured heroines, martyrs and leaders. Though Esther is an ordinary woman just trying to raise a family in New York City, the book’s creative structure gives readers a deep look into one woman’s life and times while showing the universality of her struggles. Chevat shows how innocents, even socially aware and politically active ones, can have their lives derailed by external forces. The prose has a dreamy quality about it, which can create a sense of disconnection in the midst of big events. Although the story is skillfully constructed and written, it may disappoint readers seeking a linear plot or the promise of redemption. This novel explores human tragedy through one woman’s spirituality, though nothing horrible directly happens to her; Esther is a witness and a philosopher who, through her life, reflects the quiet triumphs of others. Chevat weaves the history of the civil rights struggle and details of Jewish culture and rituals into a flowing narrative with seamless transitions through time. The book contains little dialogue; it is mainly told through Esther’s thoughts, decisions and actions. By the end of the story, readers will come to understand its title, its namesake “the only book of the Bible that does not mention God.”

An intimate, mournful depiction of a woman in pursuit of joy.