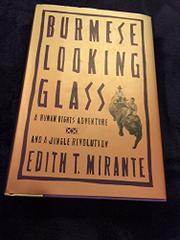 A Human Rights Activist on the Forbidden Frontier

A hip and lively narrative of human-rights activism in Burma. Mirante spent the 1970's in San Francisco, ``dressed in black velvet and antelope leather,'' slinking ``through dangerous neighborhoods with a legendary vampire guitarist.'' She also painted, and in the early 80's started spending longer and longer periods in Asia, where she went to refine her artistic technique. Mirante ended up hanging out with rebel Burmese tribes on the border between Burma and Thailand, making friends with some vivid characters, like Prince George, an Anglophilic rebel leader who habitually breakfasted on Mekong whiskey, and Spin, a photojournalist and drifter through Asia. After a period of increasing outrage at the regime of Burmese dictator Ne Win and at the US for supplying defoliant for use against the rebels, Mirante founded Project Maje, devoted to publicizing the plight of the ten tribes in the area—a plight that rarely found its way into the media until the widespread upheavals of 1988. Jailed twice, once for an illegal border-crossing and once without being charged, Mirante is now persona non grata in Thailand. Here, her eye for setting a scene and her gift for evoking rebels, brigands, hippies, and sinister security forces pull the reader into a Terry and the Pirates world where those who tread quickly get ``burnt out by wars, companion fatigue, survivor guilt, hepatitis.'' A dramatic but caring book in which Mirante's blithe tone doesn't disguise her earnest concern for the worsening conditions faced by the Burmese hill tribes.