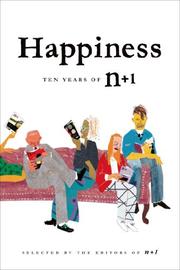 by Editors of n+1

The editors of the feisty literary journal celebrate their 10th anniversary with a collection.

“Happiness” is one “Intellectual Situation” that the editors identify, along with the death of literary theory, the relationship of hype to aesthetics, and the impact of Gchats on such apparently anachronistic behaviors as talking and listening. The trivialization of happiness, though, does not function as a unifying theme for essays that consider an assortment of contemporary issues, including climate change, parenthood, pornography and, not surprisingly, money. Mark Greif, one of the magazine’s founders, proposes a formula to end inequality that’s even more radical than Thomas Picketty’s: Cap everyone’s income at $100,000, add a tax bracket of 100 percent “to cut off individual income at a fixed ceiling,” and bestow on every citizen $10,000 per year “in recognition of being an adult in the United States.” Greif believes money should never be an incentive to work; it “would be the greatest single triumph of human emancipation” if bankers and star athletes abandoned jobs they were doing for the money, freeing them to “be high school teachers, social workers, general practitioners, stay-at-home parents, or criminals and layabouts.” Keith Gessen laments the difficulty of earning a living as a writer, forcing most into day jobs. He wound up teaching creative writing, which he first considered a sham but then came to enjoy: “I even began to feel, in a way I’d never felt as a student, that the old saw about how you can’t teach writing was possibly untrue.” Several essays focus on literature: Diana Abbott reflects on writing about J.M. Coetzee; Elif Batuman recalls a particularly surreal conference on Isaac Babel; Marco Roth laments the transformation of “the novel of consciousness or the psychological or confessional novel” into the neurological novel, in which the self is reduced to neurochemistry.

Sometimes-angry, always intelligent, deeply earnest, n+1, protesting against the glib, the slick and the trendy, is well-represented by this articulate collection.