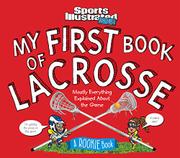 MY FIRST BOOK OF LACROSSE

Mostly Everything Explained About the Game

by Editors of Sports Illustrated for Kids

An introduction to the sport of lacrosse for beginners.

Sports Illustrated for Kids presents the basic principles and vocabulary of lacrosse, including the equipment, where it is played, and the positions of each player, as well as describing the differences between women’s and men’s lacrosse. The account follows the format of a game, with scoreboard-type boxes that keep track of the time and quarter. Vocabulary words, such as “cradle,” “face-off,” “slashing,” and “offsides,” are written in big block letters to emphasize importance. Collaged-in photographs of real players engaged in particular actions of the game appear on bright, colored backgrounds. These photographs are of players on different teams, so with each turn of the page there is a loss of continuity. Two little cartoon characters—a boy and girl—appear on each page and add silly commentary and comedic actions, like bringing a vacuum into the game to steal the ball. Other thought and speech bubbles are slapped on above the real-life photographs, adding often mindless but humorous commentary. The writing gives detailed explanations of what to expect in the game, but some of the illustrations can be confusing. Most of the players in the photographs appear to be white; the cartoon girl has brown skin, and the cartoon boy is pale.

Aside from the lack of continuity of the photographs, as an introduction to lacrosse, this book is a score.