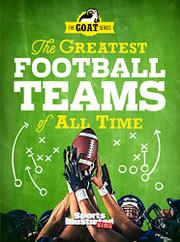 THE GREATEST FOOTBALL TEAMS OF ALL TIME

edited by Editors of Sports Illustrated for Kids

After an introduction that establishes the subjectivity of any sort of greatest rankings (“Because the only thing better than watching football is arguing about it afterward”) and defines the familiar-to-sports-fans acronym G.O.A.T. (Greatest Of All Time), this book sets out to build cases for which teams (and players) were the best. An unsurprisingly NFL–heavy book, the first chapter covers 20 top NFL teams season by season; this makes up roughly the first half of the book. The selected seasons range from 1940 (the Bears) to 2016 (the Patriots), with some franchises appearing more than once. Alongside narrative highlights of the team’s season, each set of two spreads includes sidebars covering impressive team statistics and interesting anecdotes (such as the first player to dump Gatorade on a coach, strange sports superstitions, and a prank involving an alligator in a shower). The second chapter breaks from the team focus to select individual NFL players at each position, and the third chapter branches out to single-season college teams (limited to 10, which is sure to disappoint readers from unrepresented college football towns). Then the book returns to the NFL with blurbs about the best year for each franchise, takes a break to highlight a single team from a handful of other leagues (including Canadian and a women’s league), before returning to the NFL for a collection of top-10 lists by team stats.

A football fan’s treasure trove of magic seasons and moments.