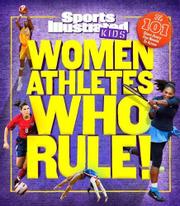 The 101 Stars Every Fan Needs to Know

by Editors of Sports Illustrated for Kids

Tributes to 101 women who made names for themselves in sports or other athletic endeavors.

Grouped in chapters but really arranged arbitrarily, the gallery begins about a century ago with figure skater Sonja Henie and swimmer Gertrude Ederle and continues (while growing more nationally and racially diverse) up to teenage pitcher Mo’ne Davis. In between it highlights select achievements of women in sports from bowling (Marion Ladewig) to roller derby (Anne Calvello) and mixed martial arts (Ronda Rousey). “Firsts” for women, such as climbing Mount Everest (Junko Tabei), also receive nods, as do athletes who overcame childhood disabilities (Wilma Rudolph) or excelled at the Paralympic Games. Each entry focuses on career highlights and comes with a color action photo. Many also feature a quote or “Wow Factor” inset trumpeting some signal feat. The abbreviated narratives frequently leave out “women’s” as a qualifier for other significant information, so that readers who don’t know what a basketball “dunk” is may be unimpressed that Cheryl Miller made two and will come away with the impression that Kathrine Switzer won the New York Marathon outright in 1974 (she was the first woman but came in 59th overall). Still, younger readers looking for athletic role models will find plenty to choose from.

Best suited for quick hits or casual browsing but unusually broad in scope and cast.