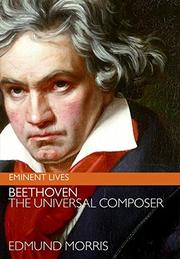 Supreme talent facilitated Beethoven’s staggering achievement, but it was his genius for transforming his peculiar torment into art that ensured masterpieces.

A Jeckyll-and-Hyde of the sacred and profane, Beethoven bellows the angelic “Ode to Joy” of his Ninth Symphony while kicking the chamber pot parked under his piano. He derides his chief patron, “Lobkowitz is a donkey!” and gushes, in love letters, over his “Immortal Beloved,” a friend’s wife. He idolizes, then demonizes, Napoleon (the Beethoven of politics), and steals his dead brother’s son to raise as his pet. By now, of course, the man has become pure myth: the Nietzschean shadow over A Clockwork Orange and the house brand of classical radio. Morris (Theodore Rex, 2002, etc.) carefully refreshes the story. An accomplished pianist, he’s especially good at technical analysis. But the tale is ultimately one of personal crises provoking aesthetic breakthroughs: Beethoven avenging himself for his father’s knuckle-rapping keyboard tutelage by becoming one of history’s greatest pianists; repairing a heart broken by penning the “Moonlight” sonata; overcoming his mathematical illiteracy to cannily bargain for commissions; listening more deeply to his muse while deafness descends. Beethoven’s signature curses, Morris holds, were two: loneliness and sickness. And certainly his headaches, rheumatism, ulcerative colitis and speculative retroactive diagnoses of psychosis and Lupus Erythematosus confirm that the five-foot-six titan suffered greatly. Struggling for transcendence, then, meant not only the identification with Eastern philosophy that Morris points out, but Beethoven’s commitment to the rapture of music. In the end, character is destiny, the author argues: Tremendous pain yields tremendous gain.

An astute introduction to the life of music’s most Promethean composer, an embodied storm, a human cymbal crash.