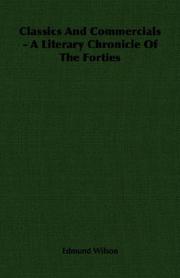 CLASSICS AND COMMERCIALS - A LITERARY CHRONICLE OF THE FORTIES

From the New Yorker, the Nation, New Republic and other periodicals, this collects between covers some 67 critical articles. Among the "Commercials", Douglas' The Bromfield's What Became of Anna and Anya Seton's The Turquoise are scored; and in the same vein are three articles attacking the current mystery field which has no candidates to rival the classics- Poe and Doyle. The "Classics" include reappraisals of Jane Austen, Thackeray, Edith Wharton, Tolstoy, Swift, etc., etc. and among the moderns there are James Joyce, Evelyn Waugh, Sartre, Beerbohn, Faulkner, Dali- the superficial "California school" (Steinbeck, Cain and Saroyan) and the delightful recent rediscovery- Ronald Firbank. The isolated, olympian superiority, the tendency to evaluate by standards which are at times inappropriate (this is for example true in his attitude toward detective fiction), has on occasion aggravated a -shall we say- simpler reading public. But there is no question that, within his limitations, which are highly intellectual in taste and expectations, Wilson is an interesting if demanding critic.