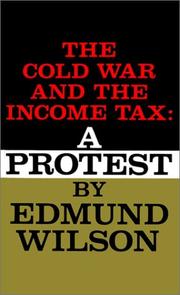 COLD WAR AND THE INCOME TAX

Between the year 1946 and the year 1955, I did not file any income tax returns", so begins the True Confession of the Dean of American Critics, Edmund Wilson, in a book bound to cause comment and serious concern. In short off-the-cuff "essays", the delinquent Mr. Wilson pays his unremitting disrespect to the IRS, a position the subsequent record shows to be only too reasonable indeed, both the personal, professional and, ultimately, "patriotic" sense. Charges Mr. Wilson: "the question of what ought to be taxed and how much and which deduction ought to be allowed" is ensnared in such legislative and linguistic tangles as to resemble a "bureaucratic theology"; among other things it encourages snooping and informing as in the Soviet Union, and develops competing national industries either for tax dodgers or tax collectors. It is a mess, and as a part of Mr. Wilson's experiences demonstrate can be quite as fantastic and as frighteningly funny as a Gogol tale. Only it doesn't stop there, since 70% of all taxation continues the Cold War tradition of more and more nuclear and bacteriological weaponry, more and more governmental control, and a devastating lessening of responsibility or rebuttal on the part of citizens. A stand must be made; henceforth Mr. Wilson shall make "as little money as possible" and so keep below the taxable levels. Now no matter how many holes one could punch in Mr. Wilson's argument and no matter how often he seems to be speaking in a curmudgeonly manner of a Roman Senator lecturing the State, beneath everything a moral earnestness is definitely involved and a social issue of pronounced importance presented. Let us be grateful for so courageous an entry into so controversial an arena.