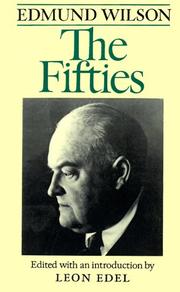 From Notebooks And Diaries Of The Period

Wilson kept extensive journals and diary entries for the entire decade of the 50's and these excerpts—beautifully edited by Edel—offer his trademark blend of crotchetiness and literary acumen. This decade opened with the death of Edna St. Vincent Millay (a former flame) and closes with Wilson's 65th birthday. Wilson's mood actually improved as he passed age 61 (the age at which his father had died). Happily married to his fourth wife, comfortably shuttling between two houses (one on Cape Cod, the other in upstate New York), Wilson was a rover no more. These journals breathe an atmosphere that Edel's introduction rightly calls "contented": "Wilson's mood is classical; he might be a writing Roman with his large senatorial head and thick body, escaping from the Imperial City for rustication." The liveliest moments here are provided by Wilson's continuously sharp—and sometimes pointy-headed—literary pronouncements and descriptions of friends (about whose foibles Wilson is seldom generous). Of "Volodya" Nabokov, he writes: "[his] idea of a literary work of art is something in the nature of a Fabergé Easter egg or other elaborate knickknack." Wilson records a meeting with Auden in which the poet "suddenly began telling us that he was no good at flagellation." Wilson travels (twice) to Europe, noting the superiority of Continental gossip and fondly watching his wife's toes (all he can see of the bed where she's reading) from his own hotel armchair. From the Bible to the Iroquois, from European fiction to the locals in upstate Talcotville, Wilson's wide-ranging interests suggest his continuing intellectual vitality. These journals form a permanent and valuable record of Wilson's interests and tastes during the 1950's; they also offer an amusing if informal social and literary history of that era.