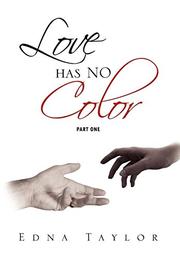 LOVE HAS NO COLOR

In Taylor’s (The Passerby, 2018, etc.) first romance in a new series, a chance encounter sends a college student on an affair of a lifetime.

Intelligent, driven Nanzee Johnson is looking forward to starting her freshman year at New York University. She’s not interested in romance until one fateful afternoon, when she (literally) runs into an intriguing stranger while exploring the city. Basil Barden is charming and handsome, and a mutual attraction sparks between them, but she believes that he’s married when she sees a ring on his finger. When he learns that she’s studying business and hotel management, he offers her a position at the Blue Vista Downtown Hotel, which he owns. She accepts the job and enters Basil’s high-powered, secretive world. After confessing that he’s divorced, he embarks on a campaign to win Nanzee’s affections and convince her to marry him. Although she worries that her father may not accept the relationship because she and Basil are of different races—she’s African-American and he’s part Irish and part Cherokee—Basil believes he can find common ground with her dad. When Basil reveals his secret heartbreak and his desire for a child, she must decide how to reconcile her desire for independence with the idea of starting a family. This premiere entry in Taylor’s series offers an engaging love story that explores issues of race, class, and prejudice. Nanzee and Basil are dynamic and winsome main characters whose attraction, while immediate, evolves into a passionate, slow-burn romance punctuated by flirtatious banter. The question of Basil’s marital status creates an element of intrigue and effectively sets the stage for revelations about his past. The exploration of Nanzee’s father’s disapproval allows for deeper character development and insight into the relationship between Nanzee’s parents. Taylor also makes sure to introduce several supporting characters who could figure prominently in future installments, including Nanzee’s friend Gwen Dunkin and Basil’s brother, Blaise Love.

An absorbing novel whose mix of romance and family drama may appeal to fans of Danielle Steel and Kimberla Lawson Roby.