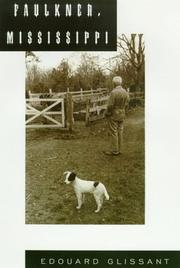 An elegant, erudite, and at times baffling reconsideration of Faulkner by a giant of Caribbean literature. A Martinican who first encountered Faulkner in French translation, Glissant launches his reappraisal after touring the novelist’s house, Rowan Oak. His reaction to the poet laureate of the past-haunted South is filtered through his puzzled attempts to apprehend how the contemporary South is emblematic of the American whole—banal roadsides cluttered with fast-food restaurants, the cultural nonchalance toward violence—making this part travelogue, part cultural and literary criticism. Glissant’s general affability is demonstrated by his address of race in Faulkner: “How can you reduce Faulkner’s pantheistic Comedy to what he did or did not say about the race question in the United States? But how can you fail to take this question into consideration?” He argues for the importance of the exercise, contending that “Faulkner’s oeuvre will be complete when it is revisited and made ‘effective’ by African-Americans,” and he credits Toni Morrison with beginning the project. Glissant brings a unique perspective to Faulkner’s work: as a Martinican, he comes from a colonial culture built on a slave-based plantation economy like the South’s (and thus views slavery with a broader perspective than most Americans); as an outsider, he’s both an objective analyst and something of an awestruck tourist. Glissant is good at sketching the big picture of Faulkner’s lifework (how the novels fit together, what role the stories play) and small details (he charts the three modes of Faulkner’s writing, “the hidden, the described, and the inexpressible” and sheds light on how the author’s trademark style contributes to his themes). It’s the middle ground—the discussion of individual novels—that’s sometimes hard to follow. The difficulty of analyzing Faulkner’s entire body of work in a short book may be due more to the novels’ complexity (they don’t lend themselves to brief synopses) than to any shortcomings of Glissant’s. A sharp, challenging, and wholly unique tour of Yoknapatawpha County.