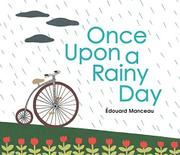 ONCE UPON A RAINY DAY

A ravening wolf, several potential victims, a wild chase, an ambush, and a spectacular reversal of fortune make for an exciting tale—even when all the characters stay home due to bad weather.

At once metafictive and interactive, the plotline is presented as a recurring story that runs its preordained course whenever its “keeper,” Mr. Warbler, steps out of his cottage to set the Big Bad Wolf to chasing a “delectable” pig, a clever hare, and a flying squirrel with a hot air balloon into the house of a former circus bear. This last blasts the predator out through a giant trumpet and so sends him away limping and muttering. That’s how the story goes on sunny days, at least. But today it happens to be raining—so though the narrative provides a blow-by-blow account of narrow escapes and lickety-split action, none of the cast, from keeper on, ever actually appears in Manceau’s deserted scenes of blocky, buttoned-up houses and geometrically tidy woodlands. No matter: with or without drawing materials, young readers will have little trouble conjuring up suitably colorful figures and dramatic tableaux of their own to superimpose on the backdrops. When, finally, the sun comes out, the narrator’s closing assurance that the story can now “start for real…” ends the exercise on a droll note.

Another playful imagination-stretcher from the author of Look! and Tickle Monster (both 2015). (Picture book. 6-8)