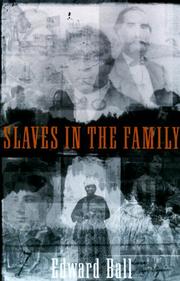 SLAVES IN THE FAMILY

A journalist's exhaustively researched, intensely personal quest confronts the legacy of slavery connecting his South Carolina family and the people they enslaved. Ball's mission, in reckoning with a past for which he feels accountable, if not responsible, is twofold: explore the story of his white slave-owning ancestors and seek out descendants of the people they bought and sold. The former Village Voice columnist displays his journalistic moxie wading through the voluminous written record (10,000 pages of family papers spanning four centuries, National Archives documents, census reports, and more) to flesh out the family character and track down slave descendants. Some were unaware of their ancestry. Others, like Emily Marie Frayer, whose parents were enslaved at Limerick, one of a dozen Ball plantations in the Charleston area, tapped a rich oral history that supplements Ball's research. Consumed with the question of how slavery shaped the identity of both black and white families, he struggles to divine his ancestors' attitude toward slaves, sifting conflicting evidence that suggests they were both kind masters and cruel taskmasters. He gets more grief from his own family than from blacks, who view his earnest apologies as largely irrelevant— though one man credits Ball with being ``man enough'' to try. ``There is nothing I can do to give back for the pain that my family caused your family,'' he tells Frayer, during an emotional trip to her birthplace. But in trying to make amends, he links several families (through Ball family papers recording slave purchases) to their African ancestry—a rare gift that, while falling short of reparation, does establish a vital entrÇe to their past. Ball's impressive detective work and the black voices it records build a monumental and extraordinary case history of the rise and fall of America's most shameful institution. Together, their searing, soul-searching grappling with past sins strikes deep at the heart of the country's enduring racial division. (First serial to the New Yorker)