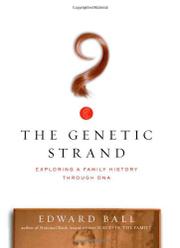 Exploring a Family History Through DNA

A provocative meditation on the implications of scientific theories about genetic determinism.

Beginning with the National Book Award–winning Slaves in the Family (1998), Ball has written four books (Peninsula of Lies: A True Story of Mysterious Birth and Taboo Love, 2004, etc.) centered in Charleston, S.C., the home base of his father’s family. In his latest, he tries to uncover the truth about his origins with the help of cutting-edge genetic science. He questions whether the carefully preserved records of Ball family genealogy tell the whole truth. When he accidentally discovers nine small packets of hair in the secret drawer of a family heirloom that has recently come into his possession, he decides to submit samples for genetic analysis, along with his own hair and that of two cousins. The hair packets were apparently collected as treasured mementos over a 175-year period ending in the 1850s. Ball takes them to several forensic laboratories, which mainly deal with crime-scene evidence but are also equipped to look at “ancient” hair. Much of the book describes the methodology employed by these labs. Ball also delves into the science of genetics, which adds another dimension to the tale. He is most interested in probing his racial history, and the results he receives are at first glance surprising. This leads him to consult anthropologists who study population migrations by identifying variations in the genotype of people of Asian, African and European descent. His quest to discover more about the origins of his family leads the author to examine deeper questions about the extent to which personal identity may or may not be determined genetically. He wonders whether our reliance on science is perhaps too uncritical.

Twists and turns that rival a well-plotted detective story, complete with a surprise ending.