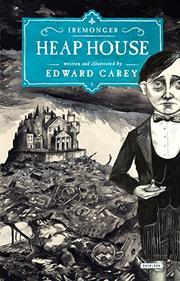 From the Iremonger series, volume 1

The first in a deliciously macabre trilogy for middle graders and young teens channels Dickens crossed with Lemony Snicket.

The Iremongers made their fortune scavenging the discards of London, and now the enormous extended family resides in the eponymous agglomerated mansion surrounded by feral rubbish heaps. Sickly Clod Iremonger, on the cusp of being “trousered” and saddled with adult responsibilities, is distrusted for his queer talent: He hears voices from those assorted “birth objects” (including his own sink plug) to which every member of the household is bonded for life. But now the objects are going astray, there are reports of an ominous Gathering, and storms are brewing in the heaps. When Clod teams up with the spunky servant Lucy Pennant, the sinister heritage of the Iremongers can no longer be concealed. Morbid black-and-white portraits reminiscent of Charles Addams and Edward Gorey punctuate a Gothic tale in turns witty, sweet, thoughtful and thrilling—but always off-kilter—and penned with gorgeous, loopy prose just this side of precious. The malevolent setting and delightfully loathsome cast highlight the odd likability of Lucy, so gleefully felonious and brash, and poor, strange, diffident Clod, whom she inspires to genuine heroism. Suspense and horror gradually accumulate into an avalanche of a climax, leading to the most precipitous of cliffhangers, yet what lingers are uncomfortable questions about treating things—and people—as disposable.