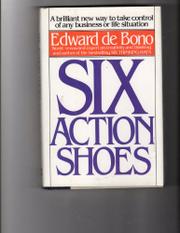 A gimmicky guide to taking effective action. It's difficult to believe that the author of the substantive inquiry into creative thought reviewed above could also be responsible for the sketchy, lightweight tract at hand. Be that as it may, de Bono (who with evident satisfaction admits to having completed the manuscript on a flight from London to Auckland) offers a simplistic footwear framework designed to help individuals take appropriate control under varying circumstances. As in his Six Thinking Hats (1986), he focuses on a half-dozen alternatives that supposedly can be mixed and/or matched. In ascending order of complexity, the possibilities encompass: ``Navy Formal Shoes'' (for routine drills or procedures); ``Grey Sneakers'' (information gathering, research); ``Brown Brogues'' (hard work, frequently requiring street smarts or initiative); ``Orange Gumboots'' (emergency actions in which safety may be a prime concern); ``Pink Slippers'' (compassion, sensitivity to human needs); and ``Purple Riding Boots'' (official authority). Whatever the merits of these toehold paradigms, the author is not putting his best foot forward. On the printed page, in fact, his sole-mates are exposed as little more than antic conceits likelier to lead to derision than productive performance. At one stage, he has an apocryphal corporate executive faced with the necessity of firing a loyal and longtime employee enjoin a subordinate to: ``Put on your pink slippers, and deal with the situation.'' In like vein, another imaginary underling charged with containing an incipient scandal is told: ``It's orange gumboot mode. We have to move very fast.'' While pedestrian claptrap of this sort might help a few readers to give themselves an occasional kick start, most would be well advised to ankle on by.