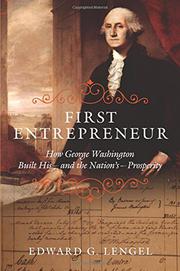 A study of the Founding Father encapsulating some of the early American values of industry, parsimony, and prudence.

It’s no surprise that George Washington was a prosperous man, from landed Virginia gentry to building and growing Mount Vernon. Historian Lengel (Thunder and Flames: Americans in the Crucible of Combat, 1917-1918, 2015, etc.), whose stewardship of Washington’s papers at the University of Virginia allows him intimate access into his subject’s mindset, emphasizes the founder’s motivating belief that a free exchange of virtuous interests would ultimately unite the young country. Owning land was the first definer of wealth in the Colonies, and in his capacities as surveyor and land investor, Washington also understood the necessity of harnessing the growth of tobacco. Marriage to the wealthy widow Martha Custis “offered George a shortcut to fortune” and greatly increased his vast acreage, allowing the couple and her children to live rather luxuriously, even frivolously, until the Revolution tempered Washington’s ideas about self-sufficiency and frugality. Henceforth, the not terribly educated but creative and incisive Virginian resolved to replace tobacco at Mount Vernon with wheat, thereby skirting British merchants directly, and he also added an innovative gristmill so the wheat and flour could be sold domestically. Washington’s own road to economic freedom mirrored that of the nascent nation. In his delineation of Washington’s role as military chief, Lengel makes some compelling assertions about the general, especially when he was mired in Valley Forge with scant supplies and a mutinous army. “Money is the sinews of war,” Washington declared, advocating for soldiers’ wages, eliminating waste, upholding transparency, and even establishing at the fort a “public market” with local farmers and tradespeople to sell directly to the army. The author organically traces the evolution of Washington’s free market thinking through his first and second presidential terms: building a national economy, encouraging domestic manufacturing, establishing a central bank, and developing a sense of unity of purpose.