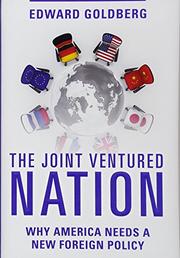 A global economics consultant debuts with an analysis of the failure of American foreign policy to adapt to the new realities of an interconnected world.

The days when leading nations could act solely as rivals are over, writes Goldberg (Political Economy/New York Univ. Center for Global Affairs), who served on Barack Obama’s foreign policy network team. Now, in a globalized world where markets and central banks shape events as much as governments and diplomats, world powers must become joint venture partners. Like corporations that form pragmatic partnerships to enter new markets for mutual profit, the United States must begin to relate to such logical JV partners as the rest of North America, Europe, Japan, and China in ways that reflect their mutual dependence. No longer a matter of confrontational politics, or of making the world safe for democracy, American foreign policy must now be fine-tuned to engage in “a multilayered game of power politics wrapped inside the enigma of globalization, which is then stirred and shaken by markets, central banks, and social media.” Recounting the forces that globalized society since the 1970s, Goldberg details the impact of interconnectedness in the U.S., where 70 percent of job-creating foreign investments come from Europe and some 6 million Americans work for European firms. Nonetheless, Americans’ “subliminal fear” of the outside world and the painful economic effects many have felt from globalization may prevent the U.S. from acting with the needed subtlety and nuance to succeed in a world lacking sharply defined good guys and bad guys. Though often repetitious, the narrative features solid discussions of the changing nature of sovereignty, the power of the Federal Reserve, and the shifting geopolitical views of nations over the past decades. The U.S., writes the author, must focus on the globalized 21st-century countries and temper its obsession with the Middle East.

Goldberg’s writing occasionally plods, and his lengthy quotations from other sources become tiresome, but he does offer some provocative ideas for policymakers.