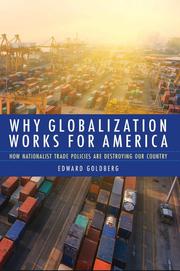 WHY GLOBALIZATION WORKS FOR AMERICA

How Nationalist Trade Policies Are Destroying Our Country

A look at the benefits of globalization in the 21st century and earlier eras.

In this economics book, Goldberg, an adjunct professor at New York University and the author of The Joint Ventured Nation (2016), provides a concise overview of how economic and political globalization have worked throughout history, and how ideologically driven propaganda and the unequal distribution of benefits have shaped the perception of globalization in today’s United States. Goldberg begins his analysis by taking the long view, focusing on the dominance of the tomato in Italian cuisine, despite its South American origins, as an object lesson and a metaphor for the worldwide transmission of knowledge. The book explores the relative change in the United States’ and China’s positions in the world since 1980, with a particular focus on how both countries have seen economic growth as a result of greater interaction. However, Goldberg also points out that macroeconomic changes have not been evenly distributed across the population. The book explores how foreign investment has driven the U.S. economy since the country issued its first government bonds, as well as how restrictive tariffs have caused economic damage in the past. In the final chapter, the author addresses problems of governance and leadership that have obscured globalization’s benefits in America, identifying key features and trends that have allowed anti-globalization politicians to succeed in driving public opinion and policy.

Goldberg makes an effective argument on behalf of his thesis that globalization is ultimately a force for good, and that the populist objection to its growth is, in fact, damaging: “America’s enemy is not globalization; America’s enemy is America.” He does a fine job of explaining both the benefits and the inevitability of globalization, and he offers readers a useful framework for understanding the distinction between changes related to foreign trade and those related to technological advancement. The book provides a nuanced discussion of “the hard-to-understand but easily exploitable fact that global economics is not a zero-sum game,” while also acknowledging the valid complaints of those who are harmed by an evolving economy. Goldberg notes that there no easy solutions to the problems faced by displaced workers, and that this fosters populist, anti-globalization sentiment that provides no substantive relief. Readers who approach the topic from a populist perspective may wish that Goldberg had offered possible  solutions to displacement and job loss, instead of merely acknowledging that such problems exist. In addition, it’s surprising that the author does not include full citations for the many works that he references over the course of the text. That said, the book does provide enough general information about these sources to give readers confidence in them. On the whole, the book does an good job of distilling a complex issue into manageable components. The prose is strong, for the most part, and although a few analogies feel overwrought (“Northeast Philadelphia...had become a modern-day version of the battle of Agincourt”), it’s consistently informative and highly readable.

A clear explanation of why globalization is a boon to all countries.