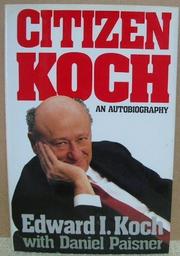 by Edward I. Koch with Daniel Paisner

After Mayor, Politics, and All the Best—three works that would surely have worn out the ``I'' key on an old-fashioned typewriter—what more has New York's cantankerous former mayor to say? Well, while earlier books have rehashed political battles, this one, Koch says, deals with personal moments. How's he doin'? Not bad at winning sympathy at first, with accounts of his pinched family and their exploitation by a richer uncle, of his gruesome war memories and his mother's death from cancer. But once out of law school and into the world, the story seems to confirm the suspicion that Koch never had a personal life. The author revisits familiar political territory—his early reform politics in Greenwich Village; his years on the City Council and in Congress and three terms as mayor; the numerous political campaigns—with emphasis on interpersonal frictions and attention to his ``feelings'': ``I was miserable in Washington''; ``I was incensed.'' The book's refrain might be ``For that I will never forgive him [or her]''; and, like Koch's other books, it's full of catty comments (``Liz [Taylor] looked like a huge horse''), word- for-word replays of petty confrontations, and rancorous complaints of what Koch claims are blacks' special privileges and demagogic leaders. And though Koch boasts repeatedly of his candor, there is no real soul-searching here. He confesses to being deeply depressed by the corruption scandals during his last term, even to entertaining ideas of suicide (``I was in absolute unrelenting agony'')—but not to any mistakes in judgment or to having tolerated patronage arrangements. Today, with ``nine jobs'' (mostly as a media personality), ``I've never been happier''—though Koch can't say the same for his cherished city: ``Mayor Dinkins is doing such a poor job.'' Testy as ever, with some juicy dish and a few good spite stories you can cheer. (Sixteen-page photo insert—not seen.)