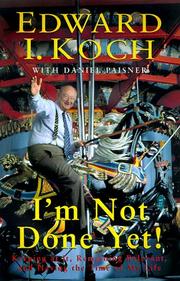 I'M NOT DONE YET!

Keeping at It, Remaining Relevant, and Having the Time of My Life

by Edward I. Koch with Daniel Paisner

Former New York City mayor—columnist—mystery novelist—radio pundit Koch reflects on life at 75, in a book whose meandering nature provides an apt chassis for Koch’s vigorous social views and uniquely optimistic/hectoring outlook. With good humor and mock shock at his longevity and continued public presence, Koch begins by enumerating the many employment venues he’s sampled in his determination to stay productive and relevant: movie critic, SlimFast spokesman, People’s Court judge. Although he’s disingenuous about being called the quintessential New Yorker, Koch embodies his city’s signal qualities, both good (his calls for racial and economic justice) and bad (his unapologetic self-importance). And while Koch’s opinions are usually strident, they are often compelling, as in his scorching attack on the widely accepted business practice of —downsizing— older workers, left to fend for themselves after decades of service. Such diatribes support Koch’s central point: the need to approach human aging shrewdly, in practical terms (money management, retirement savings, health insurance) as well as on the more essential spiritual level of keeping active and engaged with the world. His tone remains tart, but his topics are surprisingly varied: All manner of anecdotes, including graphic notes on his personal health, are followed by keen musings on subjects ranging from the racial disparities of American justice to the problematic state of live theater. And just when you think his opinions on public figures are predictably blunt (as when he savages Rudy Giuliani on civil-liberties grounds), he—ll surprise you with his humanistic consideration of a figure like Al Sharpton. If His Honor seems at times a brash (and now wizened) cartoon character who never spotted a fight or a digression he didn—t like, his latest missive should delight both senior readers, for whom Koch’s admittedly fortunate circumstances may still be instructive, and students of his classic New York attitude. (Author tour)