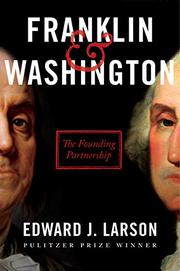 The latest addition to the relatively new genre of dual biographies of Founding Fathers.

Pulitzer Prize–winning historian Larson (History and Law/Pepperdine Univ.; To the Edges of the Earth: 1909, the Race for the Three Poles, and the Climax of the Age of Exploration, 2018) writes that both Benjamin Franklin and George Washington rose to prominence in the 1750s during the French and Indian War. Already in his 50s, Franklin had grown wealthy in the printing business, retired to make a worldwide reputation as a scientist, and become a power in Pennsylvania politics. Three decades younger, Washington used family connections to obtain a Virginia military command. More through luck and self-promotion than competence, he became a nationally known military figure. During this period, the two met in Philadelphia several times and exchanged letters relating to the war. There followed nearly 20 years apart. Sent to England in 1757 to represent Pennsylvania’s and then the Colonies’ interests, Franklin traveled back and forth until 1775. Washington married a rich widow, became a wealthy planter, and served in the Virginia House of Burgesses. Franklin returned to join the second Continental Congress in May 1775. During the six weeks before Washington left to command the army, they worked together, but details are scant. Franklin sailed to France, where he remained until 1785, lobbying for French aid. He and Washington exchanged a few letters. Their closest interactions came during the 1787 Constitutional Convention where they (with James Madison) were the most influential figures. Larson’s Washington is not the traditional passive father figure but rather an energetic proponent of a strong presidency. Franklin believed the final product gave the president too much power, but he supported it anyway. Despite Larson’s efforts, few readers will fail to note that the pair were never a close-knit team (à la Washington/Hamilton or Jefferson/Madison) or rivals (à la Jefferson/Adams or Jefferson/Hamilton) but national icons who knew and respected each other. To call them partners is a stretch.