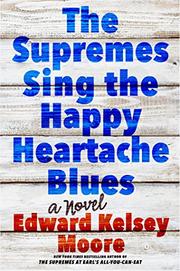 The three childhood friends Moore introduced in The Supremes at Earl’s All-You-Can-Eat (2013) are now in their early 60s and facing new challenges.

The three “Supremes” of Plainview, Indiana—a name that emphasizes the unpretentious tone of Moore’s storytelling—are down-home African-American women, except that Clarice is a concert pianist with a penchant for Beethoven, Barbara Jean is Plainview’s wealthiest philanthropist, and Odette—well, Odette talks to the dead. At the unlikely wedding of Clarice’s religious-zealot mother to the owner of a dive called the Pink Slipper Gentlemen’s Club that has only recently become “a respected music venue,” all three friends are moved by elderly blues singer El Walker’s rendition of the “Happy Heartache Blues.” And thus hangs the thread that winds a plot ever so loosely through the novel. El is actually Marcus Henry and the father of Odette’s husband, James. While a heroin addict, El abandoned his wife and small son after accidentally slicing James with a razor blade. El is off drugs, but diabetes lands him in the hospital, where his identity is revealed. As Odette tries to find a way for James and El to come to terms with each other, Clarice prepares for her big breakthrough concert in Chicago. Separated from her philandering husband, Richmond, she's enjoying her independence and their continuing active sex life, but she feels increasingly stifled by Richmond's needy desire for the kind of intimacy he withheld in the past. Recovering alcoholic Barbara Jean is in a happy second marriage and gets less page time than her friends. Subplots meander along concerning both serious issues like a father’s cruelty to his gay, cross-dressing son and sitcom clichés like a pompous, big-hatted would-be preacher lady whose hateful pretensions are exposed by an open microphone. Religion is central to most of these lives although its form ranges from fundamentalist Baptist to Unitarian.

This is comfort-food fiction, undemanding and full of Moore’s sweet but not saccharine affection for his characters.