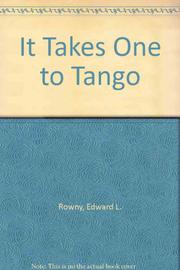 IT TAKES ONE TO TANGO

The blunt, score-settling recollections of an arms-control negotiator for five Presidents. A three-star general who fought in Italy, Korea, and Vietnam, Rowny was assigned to the Strategic Arms Limitation Talks in 1973, largely at the behest of the late Senator Henry Jackson, who prized Rowny's fluency in Russian, familiarity with nuclear-deterrence theory—and hawkish concern with national security rather than unverifiable treaties. Once involved in the arcane trade, Rowny was effectively hooked, spending much of the eventful 17 years that followed at the bargaining table with hard-line envoys of the USSR (and, in many cases, the US State Department). In his opinionated, anecdotal retrospective, the author reprises the conflicts, domestic crises, summit meetings, and other geopolitical developments that helped determine the course of the struggle between the two superpowers. While Rowny looks back on efforts to close the Pandora's box of atomic weaponry, he offers candid, often arresting, comment on his superiors, colleagues, and opposite numbers. Reagan—whose peace-through-strength doctrine the author deems vindicated—comes off best. Nixon and Ford also fare well but Carter and Bush, along with a host of lesser lights (including Henry Kissinger), are accorded decidedly short shrift. Throughout, though, Rowny (who has no problem with self-esteem) delivers his typically harsh judgments with considerable humor. In summarizing prospects for reaching an agreement with his truculent USSR adversaries during the mid-70's, he notes: ``I knew the Soviets like their currency were simply not convertible.'' Finally, he cautions that, although the US ``won'' the cold war, the nation and its allies cannot afford to let their guard down. A memoir with an unyielding point of view and genuine bite.