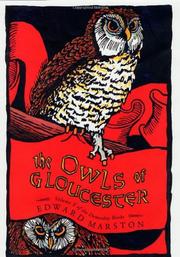 THE OWLS OF GLOUCESTER

Brother Nicholas has been missing from Gloucester Abbey for two days, much longer than it usually takes him to collect the rents from the 17 local tenants. So tensions between brothers and novices in the abbey run high. Disciplinarian Brother Paul wields his birch rod with even more fervor than usual, and harmless Brother Frewine (a.k.a. Brother Owl) threatens corporal punishment for the first time ever. Despite a recent scolding, mischievous novices Elaf and Kenelm sneak into the pantry in the middle of the night to quell their growling stomachs, only to discover the corpse of Brother Nicholas. Sounds like a job for Domesday Commissioners Ralph Delchard and Gervase Bret (The Foxes of Warwick, 2002, etc.). Another murder seems just the tonic for Ralph, suffering a bout of ennui at the prospect of mediating yet another petty property dispute far from what passes in 1086 for the comforts of home. True, his wry wife Golde is along for comfort, but she’s a bit distracted at the prospect of an imminent reunion with Alegar, her long-estranged sister. Ralph and Gervase face resistance from Durand, the local sheriff—whether from guilt or suspicion of outsiders remains to be determined. In addition, everyone at the abbey hated Brother Nicholas, though most at first claim otherwise. Keeping them all on pins and needles is the news that King William the Conqueror himself plans to visit Gloucester.